The Nebraska Dairy Princess represents dairy farmers in Nebraska and attends numerous events with the goal of connecting with consumers. 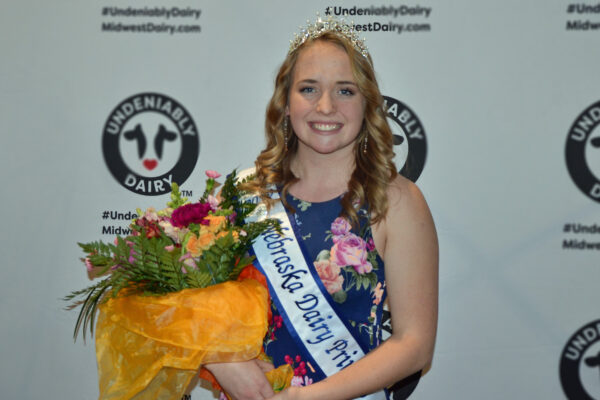 Junck, the daughter of Dwaine and Priscilla Junck, is a junior at Wayne High School. Her role as princess will be to make public appearances to help people understand the dedication of dairy farm families to their cows, their land and the milk they produce. Midwest Dairy sponsors the dairy princess program on behalf of Nebraska’s dairy farm families.

The new princess currently serves as secretary of her school’s FFA chapter. Junck also helps her parents on the family dairy farm, and shows cattle at the Wayne County Fair. Her school involvement includes FBLA, band, cross country and track, and she is active in her church.

Whitney Hochstein, a 16-year-old from Wynot, was named first runner-up to the Nebraska Dairy Princess. She is the daughter of Neal and Sharlee Hochstein and attends Wynot Public Schools. Her school activities include volleyball, band, choir, One Acts and National Honor Society. She is also an active volunteer in her church.

Both the princess and the runner-up receive scholarships from Midwest Dairy.

Visit with a Dairy Princess

The Nebraska Princess is an ambassador for dairy farmers in her state. She loves to share information about the role of dairy in healthy eating habits and how dairy farmers care for their cows, community and land.